Emma: There are two types of Bad News emails I feel compelled to write. The first is “What the hell happened here?” That one typically stems from a problem I’ve unearthed or been informed of and I need to follow up on it. The other kind is “This is unacceptable!” and I want to write it when I’m feeling enraged or embarrassed.

For extra-special Bad News emails, I might want to do a two-in-one: “What the hell happened here? Here’s what I assume happened. It’s unacceptable!”

Andy: Those double-whammies seem especially like a good idea on Fridays at 7:30pm once everyone has logged off for the weekend.

Emma: Or at 7:30am while everyone is still on their way in to the office. You go to check your work email at a red light: SURPRISE!

I feel compelled to write Bad News emails because I don’t have a very practiced in-case-of-emergency plan. Somewhere in the back of my mind, I know I’m supposed to dump baking soda on a grease fire. Similarly, I think I know to be cool-headed and gracious when there are work fires to put out. But it’s a challenge to override the instinct to just run around flapping my arms. Or, to blast off outraged emails.

Andy: It would be nice if we could just say “Don’t ever send bad news through email!” but that’s not an option. Email is too much a part how we communicate, and sometimes it really is the most efficient way. But there’s nothing like having a little bit of process in place to dilute the intensity of a situation. It can be as simple as an “incident report” that’s always generated when something goes wrong. Then, any emails sent in the heat of the moment can be as easy as: “Hey, something went wrong. Can you fill out an incident report?”

What the Hell Happened?

Having a plan for when things go wrong means everyone knows what to expect and how to act — it’s the same reason we have fire drills. When the process is really engrained (and that means you do it when you’re at fault, too) your team will communicate with you before you even ask.

Try a version of this rousing speech at your next team meeting.

“Things can and will go wrong. We can do our best to prevent it, but we will not be perfect. When something goes wrong, I want our team to be known for taking responsibility and action. I want us to be brave enough to look at it completely and honestly and think critically about how we can prevent it in the future. We’ll do that in part by filling out this document.”

Emma: So often, bad news becomes a sort of email hot potato: Quick, who are you going to pass it to? For a few months I had a boss who was a hot potato first baseman, a freaking major league pro. Bad news would hit his inbox and he’d just whip it down the line to me. I learned from him that part of being a good boss needs to be absorbing some of the heat.

Andy: I can absorb the heat by taking responsibility for what my team has done — bad stuff included. Saying, “This one’s on me, folks!” means I don’t have to email anyone.

Emma: Another good way to absorb some of the heat is to consider the person receiving your bad news. What do you want them to feel, really, when they open that email?

If I’m being informed of a mistake I made, you can rest assured that I’m already scrambling to make it better. I’m probably also mortified and despairing over my failure. I don’t need a lot of extra to grasp the gravity of the situation. In my experience as a manager, most people don’t.

Andy: The people who do need to have that pressed upon them — they are disinterested, they don’t agree it’s a problem, they don’t want to change their work or their behavior — aren’t going to have an ah-ha moment from one pissy email.

Emma: Oh, but we are so quick to dream!

Bad News emails are best when they are short and tonally neutral. Email just isn’t a very good vessel for conveying emotion. You have to rely too much on punctuation and word choice. God forbid all caps: THIS IS COMPLETELY UNACCEPTABLE!!! You just look crazy.

Andy: There’s so little nuance in an email. No way to adjust mid-sentence and no visibility into whether or not your point has even landed.

Five signs you shouldn’t send an email at all:

1. You’re really mad
2. You’d like the recipient to know how mad you are
3. The recipient is in the office
4. You’ve never discussed the problem in-person before
5. You plan on cc’ing someone

Emma: I mean, write the email. Really let loose! Your rage and embarrassment need to get out somehow. But don’t send it.

Andy: Definitely don’t send it. I write a draft and immediately delete it. I go make some tea or stand by the window or wash my hands in really warm water. I imagine myself in three days or three months when this problem will be in the past. I try to get perspective from every direction I can.

Then, when I’ve replaced all my rage with curiosity — when I’m ready to ask, “What happened and how do we prevent it?” and not “WHAT THE HELL HAPPENED HERE? THIS IS UNACCEPTABLE!” — I’m ready to try again. 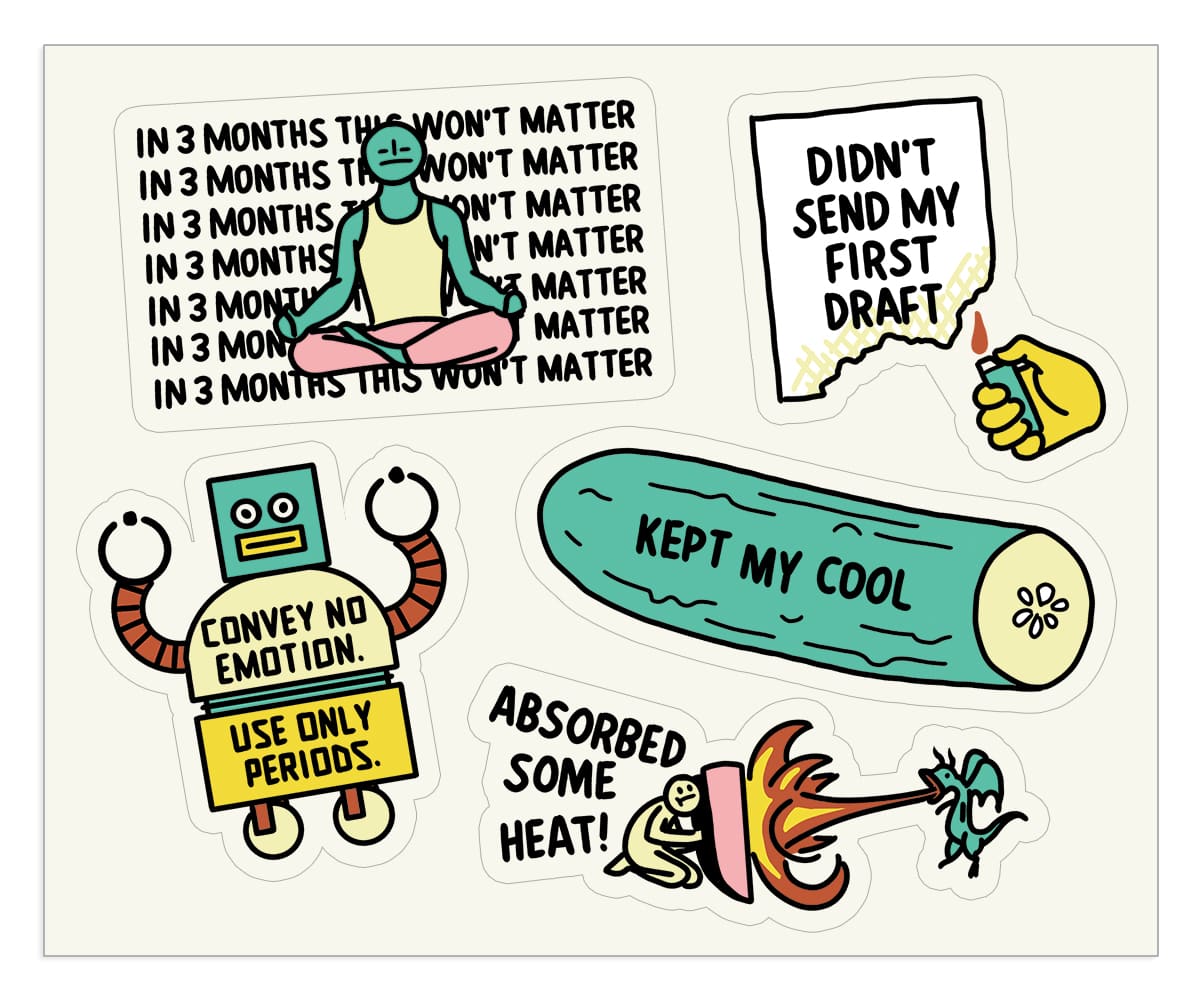 How would you answer this interview question?