Andy: There are some changes that should be announced. Things that everyone needs to be prepared for and participate in need a well-thought-out “communication plan.” But lots of change — most change — doesn’t need any announcement at all.

Emma: I’m a big admirer of quiet, humble change. No bombast, no proclamations. I’ve always craved the inner confidence to commit to something without a lot of external praise and reinforcement. It’s something I work on cultivating in myself pretty much all the time.

Andy: (Are you doing it right now?)

Andy: The thing is, most of the change new managers need to make is stuff that’s done solo: never cancelling a one-on-one, giving everyone on your team real feedback and real compliments, matching delegation with people’s career goals. You may think to yourself, “I should tell my team about the thing I’m about to change. It’ll hold me accountable! It’ll show them that I care!” But what it really does is draw attention to the next time you do cancel, or avoid feedback, or delegate poorly.

Emma: And you’re going to mess it up. Probably pretty soon. It takes such a long time to learn new behavior. False starts are normal! What person sticks to all their New Year’s resolutions past February?

Andy: Plus, announcements of personal change are really awkward for your team to respond to. I’ve had bosses who mentally checked out for weeks or quarters at a time, and then would launch an epic recommitment campaign. Gone were their old ways of not answering emails until it was too late! Of simply +ing me into a heated email thread with no context! Of swinging by my desk minutes before a meeting asking, “Do you need me to be there, or you got this?”

What was I supposed to say? “Cool!” or “I’m glad!” or “Great, because it was terrible when you were so terrible!”

Emma: Turns out, your team can’t hold you accountable. YOU’RE THEIR BOSS! If you’re going to announce changing to anyone, have it be to your boss.

Andy: So what’s the alternative to big, sweeping, trumpeted change? My dad is always losing weight (or gaining it) and he has a little note on his bathroom mirror that says small consistent choices = big change. And to me that’s what becoming a better manager feels like. It’s picking a small thing to do better and doing it again and again. It’s reminding yourself that little things add up.

Emma: The scariest times for me to try to change are when I feel like I’ve painted myself into a corner. Maybe I’ve let a problem employee’s bad behavior slide for way too long, or I’ve deprioritized something I shouldn’t have. I develop some warped version of a sunken cost fallacy — that because I’d acted in one way for so long, it would be unfair to suddenly have consequences for that employee, or it’s too late to re-prioritize. That I’m not allowed to reset until I’m in a completely new situation: “At my next job, I won’t let this happen.”

Andy: But even that is so much pressure. I’m starting a new job and I’m stopping all of my bad habits cold-turkey!

For me, I have to let go of what other people might think. I’m not saying I’m cavalier about how my actions impact the human beings on my team. But I just have to allow the reality that changing to be a better boss is worth a little bit of whiplash.

Emma: Right. Reprimanding someone on my team for things they’ve been doing for months might give that person whiplash. They might think I’m completely out of line if I tell them I’m putting them on a PIP. But I remind myself to zoom out. If their crappy behavior has been negatively impacting the rest of the team for all those months and I show them I’m finally taking action — that’s what matters more.

This is the system we use to outwit our bad habits and how we’ve slowly but surely become better bosses over the past 10 years.

• Home in on a specific change. You might know what you want to do differently. You might want to review our Good Boss scorecard. Choose one at a time, and turn it into a legit SMART goal.

• Write it down where you can see it. This can be a sticky note reminder on the bathroom mirror or your computer monitor. Create a checklist in your notebook you can flip to throughout the week.

• Revisit it often. Schedule calendar reminders to pop up throughout the week. Block out time daily or weekly or monthly to focus exclusively on what your goal is. Journal about it. Score yourself.

• Get an accountability partner. It could be your boss or a co-manager — it just needs to be someone who is committed to your changing and who will follow up with you on your progress. Have them prep with you. Have them reflect with you. Have them score you. Brainstorm hacks with them — for example, if you wanted to work on never cancelling a 1-on-1 again, you could switch the owner of the calendar event to that person so you’d have to ask them to cancel. Think of it like freezing your credit cards in a cup of water.

• Keep going. Even if it’s not going well. 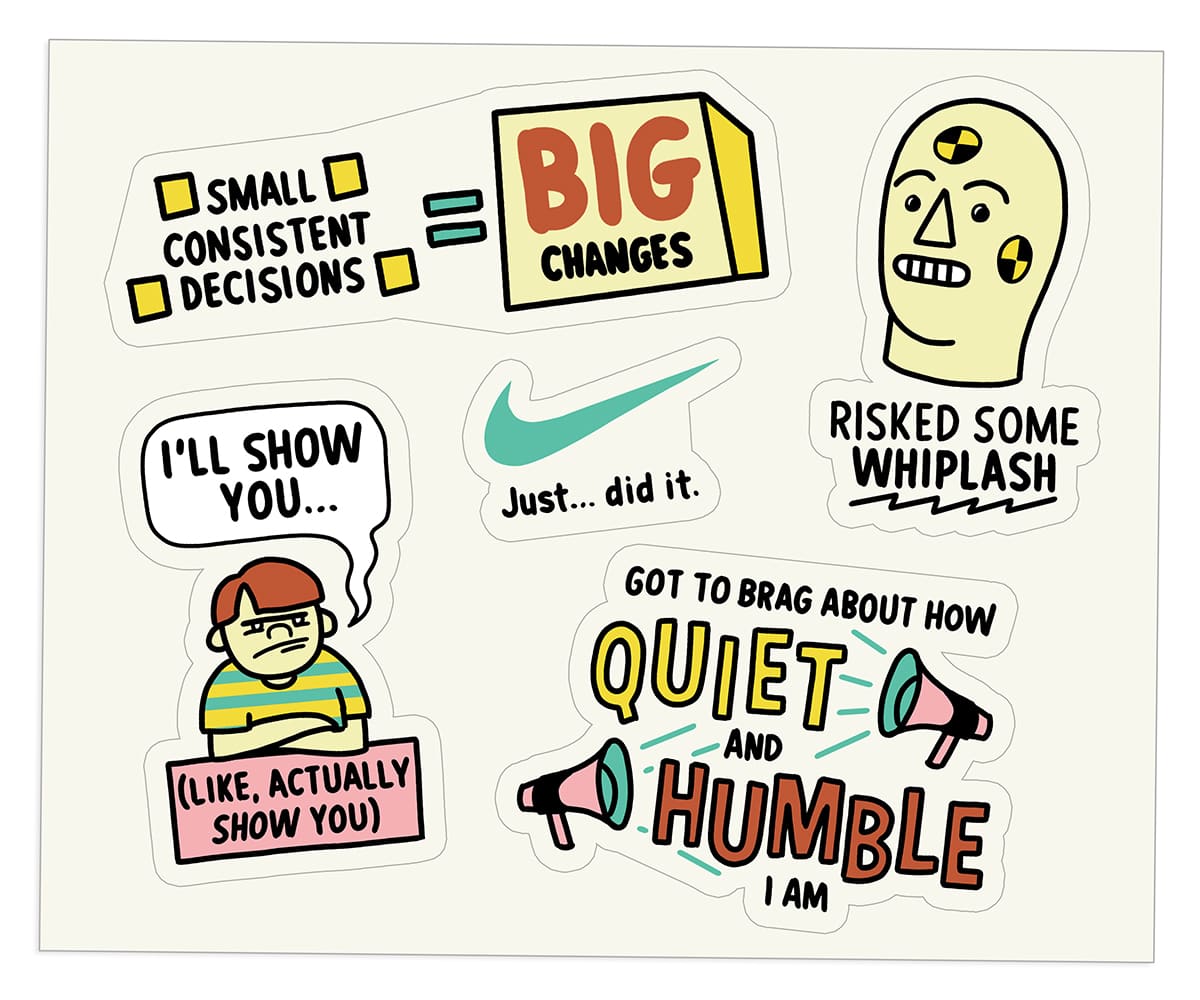 How long will it take?

Three strategies for speaking up