Andy: A huge and sometimes scary part of being a manager is delivering results. Lots of times, it’s the only thing you’re being measured on. The best way to deliver those results is to systematically make your team’s jobs easier.

Emma: Right. You can’t do the work of an entire team alone. But you can nose out whatever makes your team less able to get results and help fix those problems. That’s what we mean in our Good Boss scorecard by I remove obstacles.

Andy: Removing obstacles is at the heart of our management philosophy, but it wasn’t intuitive for me. I thought a leader was a visionary wielding a gleaming sword.

Emma: Can you imagine if our scorecard had Be a visionary on it? I wouldn’t go as far as to say removing obstacles is easy, but I love how practical it is. Anyone can do it!

Andy: Exactly. It doesn’t have to be epic. It can be as straightforward as making my team’s jobs less hard. If there is anything that’s in the way of the work, I want to find it, and get it gone.

It’s very tempting to start with things I can’t control. That’s usually where the massive, glaring problems are. I’m not saying to avoid those, but if you start there, you’re probably going to spend a year trying to fix that problem. Your team will start to feel like you’re all-promises-no-action, even though you’ve been working like crazy for a whole dang year.

I prefer to start with the obstacles that I can move — things that are in my control that will create momentum and build trust.

Emma: That little stuff adds up. When I was first managing, even those easy things were hard to spot. I was really uncomfortable rebelling against the status quo — or even pointing out if the status quo sucked. I thought doing that made me a bad employee. And I’m a great employee! A former boss once told me that my finest quality was my “ability to eat shit.”

Emma: Confirmed! It was not Andy.

Unfortunately, my ability to eat shit predisposes me to being a pretty ineffective boss. It makes me blind to obstacles, and intimidated by people who are quick to point them out. I had to learn to be a problem solver — to be able to see the potential for something better to be happening. Now, I crave knowing those things.

A really easy way to find what obstacles need to be removed is to simply ask your team. These questions work in large group brainstorms, during 1-on-1s, as surveys, at exit interviews, directed laterally to your co-managers, and upward to your boss. Don’t forget to ask yourself, too.

It’s nice to preface these questions with context, particularly if you have malcontents on your team. We usually say something like: “I’m making a list of things that aren’t great that we’d like to change. I won’t be able to genie-lamp all of them. But thinking about these things and writing them down is the first step to figuring out how to solve them together.”

Andy: There’ll be times when your team informs you of obstacles that will seem dumb or distracting. At one job, my team complained that there was nowhere near the office to eat lunch. My first reaction was THIS IS SO DUMB GO BACK TO WORK.

Emma: I am having that same reaction right now.

Andy: And sometimes you do have to say, “No, that’s just the way it is.” But I’ve often found there’s another way. Instead of telling my team to just pack leftovers, I wondered aloud what we could do. A team potluck on Wednesdays? Chili cook-offs? Tweet a food truck? These solutions seemed silly to me — I was an eat-a-Clif-bar-and-some-dried-mango-at-my-desk kind of woman — but that only reminded me how much it’s not about me. If it’ll make things better and we can do it, let’s do it.

Emma: Modeling that thinking is such a cool way to cultivate a culture of problem solving on your team. When you’re not the only one removing obstacles, but you and also everyone on your team is saying to each other, “Something isn’t great, I wonder what we could do,” wow did your job as a manger just get easier.

Good Boss Achievement Stickers: No Obstacle is Too Small Edition 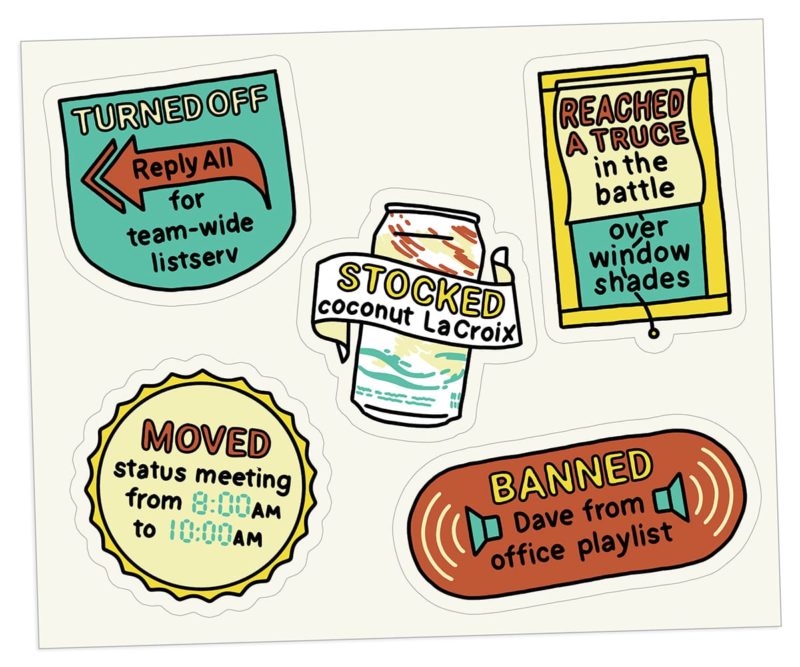