The glorious simplicity of pass/fail

Andy: Last week we talked about how we both use scorecards to define success. Today we’re going to talk about the most shocking thing about those scorecards: they are pass/fail. You either do or you don’t.

Emma: The first time Andy introduced that concept to me, I had a real oh shit moment. Where does “You kinda did it!” live in a pass/fail ecosystem? I craved the nuance of three out of five.

But that isn’t nuance. It’s noise. It shifts the analysis onto the scoring — is this a three or a four? — and away from the stuff that’s being scored.

Andy: Too few points on a scale and we fear there’s no nuance. Too many and each point loses significance. And the brain is so good at finding shortcuts. When we score something, we’re asking ourselves really hard questions, and our brains try to lessen the cognitive load by looking for an easier satisfactory answer. It finds it, often in a midpoint like three out of five. There’s this perfectly terrible portmanteau for it, satisficing. An answer looks satisfactory, but it’s actually meaningless.

Satisficing is in direct opposition of what we are trying to accomplish with scorecards: a meaningful discussion stemming from a meaningful score. With pass/fail, there’s no fence to satisfice on. It’s a yes/no question: Did you do the thing or not?

Emma: The real discussion is the why and the how something passed or failed. That’s where you get the ideas of what to do and where to focus, how you’ll actually learn and improve. It’s where the work is. But that was a new way of thinking for me.

Andy: I mean, the pass/fail grading system is mostly for things you should be embarrassed to fail — Drivers Ed or Piano for Non-Music Majors.

Emma: We prefer to use it when things are really incredibly hard. Which isn’t to say impossible. If I’ve designed a scorecard that I realize isn’t actually achievable, it’s not a very good scorecard.

Andy: If there’s no way to hit success, then we’ve got to break that success down into smaller chunks. This is not to baby ourselves and our teams, but to be realistic. You can’t start training for a marathon and every day come home and say, “Did I run the marathon today, pass or fail?” What a miserable training program.

We auto-format our scorecard spreadsheets to turn the things we fail at red. We make it a nice, quiet red, but no matter how soothing the shade, a wall of red is a gut-punch. But you’ve got to embrace that red! It’s where you’re about to get better. Here’s what has worked for us:

Don’t tackle all the red at once. It’s not an efficient way to grow. We shrink down our scorecards to a few of the things we’re failing at, and focus just on those. If we’re accountable for the entire scorecard, we’ll bring in our bosses to help figure out what to prioritize.

Depending on the size and scope, we may pick one fail a week to think about. Or, we might be able to bite off three per quarter. We commit to that small number of things until they become habits — until we’re racking up passes — and then we move on to the rest. This is how we develop mastery.

When we’re passing half the time, we’re no longer cluelessly fumbling around in the dark. We’re aware of what we’re doing. At 75 percent passing, we’ve got comprehension — we know how to pass. At 95, we’ve mastered it and are ready to focus on another scorecard element.

Emma: When I fail at the thing I set out to do, it so easily translates to “I’m bad at this — and also everything!” That kind of self-doubt is my native language. I’ve had to learn a new one that translates failure to “Cool! There’s so much still to learn!”

This translation is one of the most effective ways I champion failure, for myself and for my team. If one of my direct reports is facing failure, my job in that moment is to remember we’re allowed to suck at what we set out to do. It’s to say, out loud, “Cool!” It’s to maniacally rub my hands together and announce with glee, “Let’s get to work!”

Andy: Yes! It’s really exciting to do that flip for your team.

Failing doesn’t feel great, but when fails start clicking into passes — it feels so good. That sense of accomplishment, of mastery, is built into lots of things: sports, video games, baking a souffle. Scorecards bring some of the fist-pumping satisfaction of sinking free throws, of leveling-up, of serving a souffle that hasn’t collapsed, into something no one bothers to measure.

Emma: It’s a glorious thing to get better at something that’s hard. And to see it right there on your scorecard. This kind of constant growth isn’t noticeable without a benchmark to catch it. It’s like getting taller: the wall chart is essential. It gives you a way to confidently say, “I am better than I was before. I am a different person than I was last week, last month, last year.” So cool. 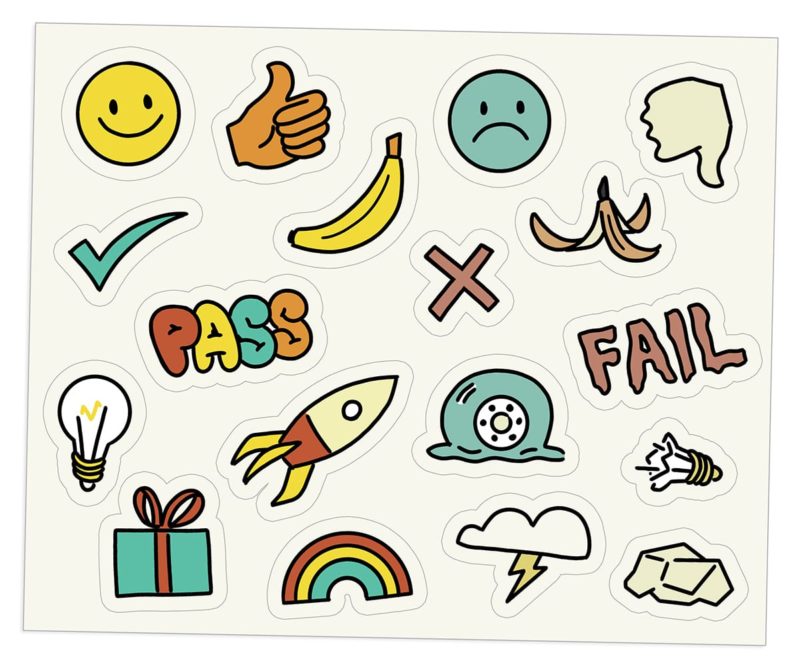