What to do when you have a bad boss

Emma: Let’s talk some more about bad bosses — the kind who aren’t doing a good job managing you, and don’t appear all that interested in improving.

Andy: It’s a question we get a lot, especially from readers who aren’t managers: How can I manage up to a disengaged boss? What’s the best way to advocate for myself and for my peers?

Emma: I like these questions. I think about them all the time. I don’t like being poorly managed and, like most people, I’ve had a lot of poor managers. I’ve also been a poor manager.

Andy: It works like this: you’re clear about what you need, you ask for it, and you get an answer. It reminds me of the “Can I afford it?” portion of the Suze Orman show. People call in to tell Suze what they want to buy, share how much money and debt they have, and she tells them what’s been true all along — they can or cannot afford the new car or Birkin bag or 5-acre horse farm. I think it’s comforting that so much of human life is just asking and answering questions.

Emma: Granted, direct questions aren’t always easy to formulate, especially if you don’t really know what you want. Or if the thing you want isn’t something you can reasonably expect from your boss: endless praise, a sense of self worth.

Andy: It’s also really normal to just want your boss to be different than they are — maybe they’re too panicky when things go wrong, or never stand up to senior leadership. But it’s always going to be more effective if you do the work to figure out what that means to you in concrete terms. My boss may not be able to “be less panicky,” but I can ask them to call me on the phone instead of sending rapid-fire Slack messages. Or I can offer to work with them on a crisis response protocol when things are calm.

As a boss, I’ve been asked to be different and better in lots of ways. When someone is direct and clear about what they need — more feedback or help, some clarity or career coaching — I’m able to share what I can do, and be honest about what I can’t do.

Emma: From there you get to decide: Can you tolerate your boss’s answers? My personal tolerance threshold is pretty low. I think a person can and should only manage up for so long, which is why I’ve quit a lot of jobs.

Andy: Yes, you can fire your boss as your boss! If they are not meeting expectations, they will lose their job managing you.

Emma: I know quitting isn’t realistic for everyone. It is a privilege to be able to job hop — the right jobs need to be available, with the right salaries and the right benefits and the right whatever. But I also think more unhappy people should quit their jobs, faster than they do, especially if the reason they aren’t quitting is because they think they can’t get something better, or because it might look bad on a resume, or because looking for a new job is hard and scary.

Emma: I’ll gladly be the poster child for moving on. I’ve had 9 employers in 11 years, and 6 of them I chose to leave in large part because I wanted a better manager. I’ve only regretted it once, insomuch as I ended up with a worse manager than I had before, and even then it led me to one of my all-time best co-workers, who would later introduce me to Andy, and here we are. It worked out great. Let’s all quit!

Andy: I echo Emma, and I’m someone who, at the idea of quitting, has screamed inside: WHAT IF THIS IS THE ONLY ROLLER COASTER THERE IS AND I GET OFF? WHAT THEN!? But if you’re surrounded by people who aren’t helping you get where you’re going — or worse, are keeping you down — it’s time to go. There is more than one roller coaster, and the theme park isn’t the only place to have fun.

Andy: Let’s get logistical about your freedom and your happiness: if quitting isn’t an option right now, what can you do today, this week, this month, to make it an option in the future? I recommending starting with The Story of a Fuck Off Fund. There’s tremendous power in knowing you can walk away from a bad situation at any time.

Emma: You only have this one life! 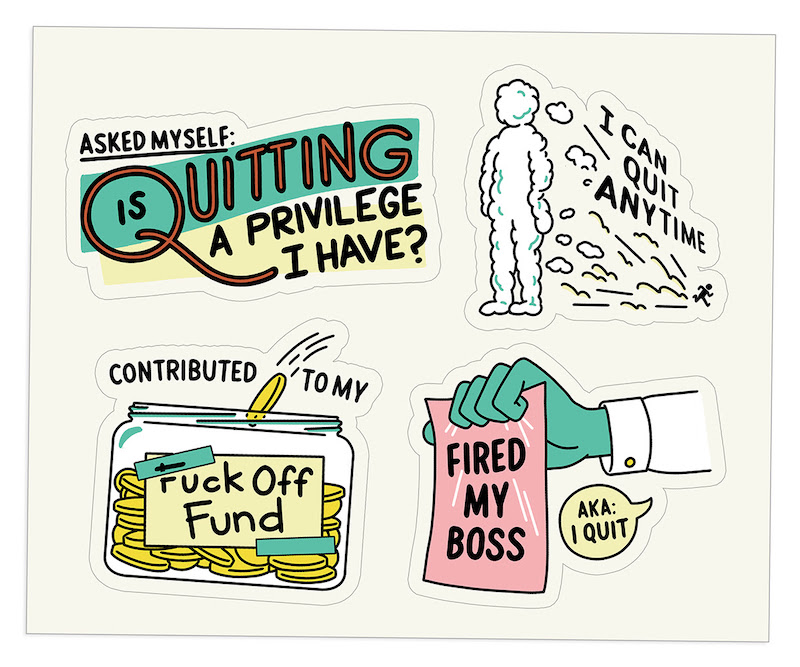 A few more ways to say “I don’t know”

When the interviewer is intimidated…