Andy: This week I read an awesome article by Rebecca Barrett-Fox, an American Studies and Sociology professor, called We’re not made for constant crisis — and neither are our students. It’s drawn from her lectures on Sociology in Disaster. I loved it.

Emma: I did too. I like any framework that helps me understand what I’m doing and feeling, instead of floating untethered inside of an experience.

Andy: Barrett-Fox writes about human surge capacity. We’re resilient as human beings because we are great at surging — we can rally our resources and do what needs to be done. But that ability is built for acute issues that are limited in scope. Things with finite time spans: you outrun the bear, live through the tornado, even survive the deep winter.

Emma: You also barrel through a grueling time at work to hit the deadline, close the deal, service all the customers. I think surge capacity is such a useful concept because it’s scalable. It applies to the disaster pile-up we’re living through now inside of a pandemic, like Barrett-Fox describes, and it also applies to our personal pan pizza-size surges at work, in life, and at home.

Andy: We wanted to share this idea with you because it’s the kind of thing that once you know and name, you might think through problems in a different way. You can map the surges you and your team are experiencing and make smarter decisions.

Emma: I imagine we all have endless examples of work surges. At least one of three things is usually going on: a time constraint; a new or unfamiliar type of task; and/or a heightened emotion, like fear, risk, or panic. Surges are inevitable. Ideally, they look like this:

Andy: Yes. That first one might be something like a lunch rush, or someone calls in sick, or the day or two before a deadline. You bust through it and then things settle back down. The second one is a more sustained surge — maybe a longer-term project, or a busy holiday season, or even something like college finals where for two weeks you’re surging through writing papers and cramming for tests. But still, it ends and you get a long, flat summer to replenish.

Emma: Oof, yep. You’re in a stack of surges without much recovery time in between. It leads to that I’m drowning in work! feeling: the waves are crashing too quickly for you to catch your breath. Even on your down moments, you’re taking on water.

Andy: I’ve put my teams through surge stacks before. In one job, we had big monthly publishing goals — and every month we’d surge those last two weeks to hit our deadline. Month one, January, was “doable.” The problem was right after we squeaked by our deadline, we could already see the end of February approaching. We were so tired from the January surge that we weren’t able to put in the work to have a more consistent, sustainable February so it was another two week sprint to the end. And so on: month after month, we surged until we figured out our staffing months later.

Emma: The scariest kind of surge looks something like this: 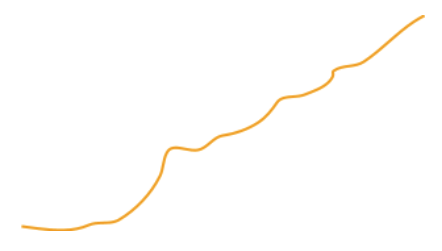 This shape happened a bunch during the past year — I’m thinking of ICU workers and the postal service and teachers and parents. I’ve also seen it happen in other, non-pandemic situations. Years ago, I worked for a beauty box company that had cracked the code on their customer acquisition strategy — your first box free! — and had record numbers of sign ups. They also made it really hard to cancel. Customer service got walloped with a tidal wave of people who called to cancel after that first free box. Then another tidal wave. Then another, every day until months down the road when the company finally decided to let customers cancel online.

This shape of surge means something has broken: the surges are piling up with no chance for a taper-off until whatever is broken gets fixed.

Andy: We’re not built to keep surging endlessly. Barrett-Fox writes, “In a disaster, we use all our resources to survive that moment, knowing that we’ll soon enough be able to replenish them. In a never-ending crisis, we don’t know how to dole out our energy.” I know that most jobs claim not to be disasters, but…

Emma: They can certainly feel that way!

Andy: Exactly. I’d argue the amount of stress, rapid response, level of brain power, and relentless expectations in a lot of job surges are a lot like disaster.

If you’re a frontline employee, you probably don’t have much control over the surge. They come down on you like rain. But, you can be aware of the toll they take, go gentle on yourself when you’re feeling the surge stack meltdown, and you can talk to your boss.

Emma: We wouldn’t be us if we didn’t remind you that you can also think about quitting if no one is taking a bad surge pattern seriously.

Andy: In middle management, you might be able to use surge theory to push back on incoming work, to ask for more resources, or pause before you say: Yes, we can! How many surges have you and your team been doing? What is actually possible? What is humane?

Emma: A visual is a great way to demonstrate to someone who doesn’t like to hear We can’t or No, that’s too much. Have you mapped out your team’s surges so you can show what you’ve been experiencing? If not, try it for the rest of this quarter and see what you see.

Andy: It’s nice to ask your team to draw their surges too! You can do it in an anonymous Google doc if you want. Just have them Insert New Drawing → Scribble. They may be doing a good job of acting like they’re superhumans when in reality they’ve been surging for weeks on end.

If you have more power in your organization, you can do even more to stop and prevent surges. You can resource your teams well, set reasonable goals, modify those goals, and make humane decisions like, say, making it easy for customers to cancel their subscriptions online.

Emma: You can ask your managers and department heads to map their surges. What departments are hurting? Does a surge pattern move from one department predictably to another? Are you being mindful of when we’re all living through non-work surges so you’re not stacking more on top of a very overworked system?

Andy: Finally, ask yourself if anyone has pushed back or said no lately. If not, don’t assume it’s because everything is great. We like to ask around, Is there anything we should stop doing? It opens the door to the kind of improvements we don’t always think of in our more-more-more mindsets. And that’s really powerful.