Emma: Rumors are a drag, but are, frankly, a part of interacting with other human beings. And have been since we were in, what… elementary school?

Andy: And for as far back as the Stone Age, probably. We just don’t grow out of that stuff. Discussing the actions and motivations of other people is often deeply linked to our sense of survival: we’re trying to make sense of an unclear situation or prepare for a threat. A classic rumor is, “Hey Emma, I heard layoffs are coming.”

Andy: I’ve heard it and wondered what’s going to happen. I’ve played scenarios out to their possible ends, and discussed who I think is most at risk, how the company is going to make its decisions, what it means for me. I’ve done it aloud, with other people. I’ve worked at the rumor mill.

Emma: Yeah, my first move when I hear a rumor is certainly not to sit alone with the information and quietly wait to find out if it’s true. It doesn’t really matter if I’m a manager or not — I’m going to go talk to someone: my favorite coworker, my boyfriend, my parents. This is all Very Normal Conversation. So, my advice for dealing with rumors can’t be to simply abolish them. It would be hypocritical, at least coming from me.

Andy: Hypocritical and also impossible. I find great relief in knowing that my job isn’t ever to stop a rumor from existing. It already exists! If Beyonce can’t get an “unflattering” picture off the internet, I’m certainly not going to be able to stuff a rumor back in its bottle. My job is to help surface the truth in the most useful way possible. As a manager, I’m more weatherman during a tornado watch than god of wind.

How to Approach a Rumor

Once a rumor’s out, it’s out — which means it will probably need to be addressed. This is the information we try to figure out before deciding on a course of action.

Emma: As a general rule, it’s best to share real information as early and often as possible — a bit of prevention can go a long way. If you want to create an environment that’s rumor-ready, don’t share any information. Or share contradictory or mis-information.

Andy: They’ve actually done studies on this. When rumors carry more truth than the official story, they thrive. And, in many organizations — the ones with an established grapevine — rumors are 95 percent accurate.

Emma: I was just talking with a good friend who works at Nordstrom, who found out in a press release earlier this month that 20% of her office is going to be laid off — but no one knows which teams will be impacted. This sounded absolutely bonkers to me: Why would Nordstrom announce such big news before all the details were neatly packaged up and ready to be delivered? But the more I think about it, the more I get it. With everyone working remotely and no end of COVID-19 in sight, rumors of downsizing were probably out of control. I may not be totally on board with the execution, but I can appreciate that concrete facts were communicated as they were decided.

Andy: I think when most of us are confronted with a rumor, we feel the urge to confirm or deny on the spot. This is often impossible to do accurately. If you know something and haven’t disclosed it, there’s probably a reason why.

Emma: And if you don’t know, trying to guess falls dangerously close to mis-information. You are definitely allowed to ask for advice. One of my favorite parts of Alison Green’s Ask a Manager column is how often she recommends “go tell your boss” as a course of action. I think this applies to both individual contributors as well as managers. If your boss isn’t an option, HR is a good (if not better) surrogate. The key here is: you don’t have to go it alone.

Andy: Whenever I need to buy time, I’m honest about it: “Thank you for telling me that. I can understand how scary that would be if it’s true. Let me look into it and get back to you.” From there, I can map out my next move.

Andy: You know it.

Rumor: The entire Atlanta team is going to be cut and the office closed

Emma: The classic rumor and one that’s perfectly appropriate for the office. Is it true?

Andy: It’s true. But the company isn’t planning to announce it for another month or so — there’s a lot not finalized regarding relocation or remote work opportunities. I’ve been instructed to keep this under wraps until it’s official, but I also don’t want to lie.

Emma: Right. Even “I don’t know” feels problematic because you do know.

Andy: In these types of situations, I’ve had decent success using hypotheticals: “I haven’t heard anything official, but the numbers for the past two quarters haven’t been good and our parent company bases a lot of decisions on month-over-month growth.” It’s a version of yes I feel comfortable giving. From there, I can also try to understand what my anxious team member might need: “Is there anything you’d like to talk through, especially in light of these month-over-month numbers?”

Emma: I’d also flag that the rumor is out to my boss so they can help move the official announcement date up. A couple of 1-on-1 conversations with your reports without any official news is only going to fuel the rumor flames.

Rumor: Women at our company are paid 58 cents on the dollar compared to men

Andy: Yikes! Is it true?

Emma: No clue. But the rumor is getting the people on my team really outraged. In fact, I’m getting a little outraged!

Andy: Me too! Quite simply, I only want to work, or hire others to work, at a place that pays equitably. If this rumor gets on Glassdoor or in the news, it will rightfully damage our company’s reputation and our ability to hire great candidates.

Andy: The goal: equal pay for everyone. Until then, fact finding, truth telling, and transparency.

Rumor: Two people on the team are sleeping together

Andy: None of our business.

Emma: But Andy! They arrive to work at the same time, they leave together, they eat lunch together every day.

Andy: None of our business.

Andy: If there’s nothing in the company policy about peers sleeping together, let’s just shut this conversation down.

Emma: It’s truly juicy gossip, and one of things that seems like there could be damage down the line: What if they break up and they can’t peacefully coexist on the team anymore? What if one of them gets promoted and now there’s a power imbalance? What if they start kissing each other during a meeting? But that’s all hypothetical. And also, it’s none of our business.

Andy: I’m totally okay with a little bit of school marm-y reminders whenever this type of news comes across my desk: “That’s not work appropriate.”

Andy: This is an easy one: it’s personal information and it’s about a protected class. It doesn’t matter if her potential pregnancy and parental leave will impact the team’s productivity. It’s not up for speculation.

Emma: Yep! If this is a rumor I’m hearing, I try to zoom out as far as possible. “We’re not going to speculate on anyone’s pregnancy. If you’re concerned about our team’s readiness to accommodate a leave of absence for any reason, I’m happy to talk about that.” 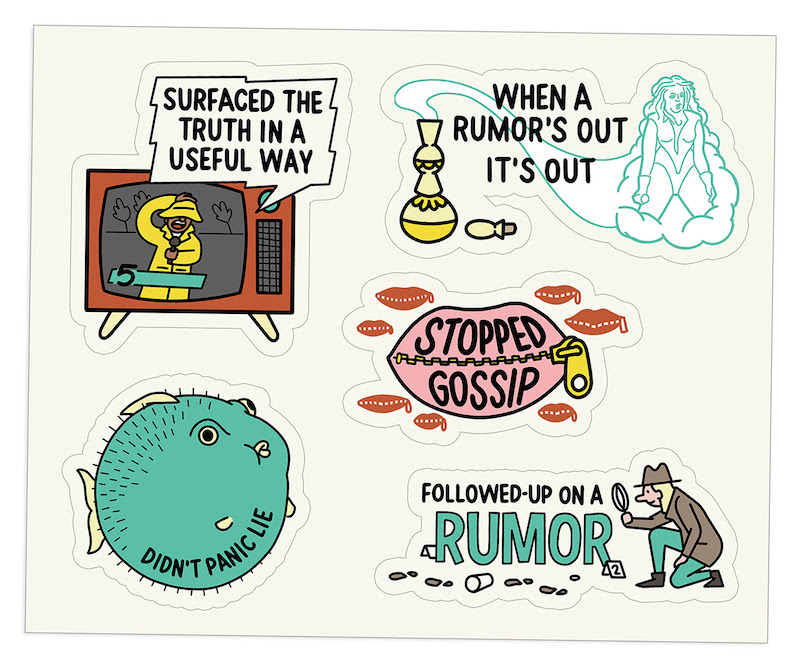 What to talk about at your next informational interview

I think I failed my teammates in another country