Cool Boss Moves is a new series where we share the tips, tricks, and strategies we stole from other great managers.

This week: Be the volunteer.

Emma: I learned this Cool Boss Move from Andy back in early 2017.

Emma: It’s a good thing! We had been working together for about a year and blam-o! Our team of five grew to 25 in the span of a few months. Every few weeks I felt like I had to overhaul how I managed and gain the trust of more and more new hires with disparate brains and personalities. I co-opted one of my favorite strategies by watching you.

Emma: Let’s see if you remember the first time I saw you do it. We were in a pretty big meeting with 10 writers, doing a workshop on something like “Information vs. Analysis.” It was a great meeting: funny, collaborative, no glazed-over stares. You needed an example to demonstrate a point, so you created one, right there on the spot — a few sentences about being a soccer player. It was so bad ass. I’d never seen a boss put their own raw, imperfect work out into a room full of people, let alone a group of newcomers.

Andy: Ha! I actually remember this very clearly. The experience from my end was stumbling across a giant hole in my presentation: Oh crap, I need an example, I should have prepped one before, but now it’s now, where can I get one? I don’t have time to Google it. I really should have made one earlier. Ok, think, thinkkkk. So, yeah, I started writing one. In practice, the move felt anything but cool.

Emma: It was extremely cool. If it had been me, then, I would have asked for a volunteer to write the paragraph, and after waiting for some length of time in painful silence, probably called on my highest performer. It would never have crossed my mind to just start typing. Subconsciously, I wouldn’t have felt able to turn out something good enough to show on the spot. It would be just too exposing.

Andy: Determining what’s “good enough to share” can be such a stumper. In this case, good enough to share wasn’t the finished product. It was the process itself. I knew that because you and I had had a long discussion about the qualities we wanted to cultivate on our team. A big one was collaboration, especially on works in progress. I didn’t know going into the workshop that I would be writing an example on the fly, but I did know that one of the best ways for me to grow the qualities I wanted to see on my team was to practice them myself.

Emma: That’s what makes it such a Cool Boss Move! It wasn’t the quality of the example that impressed me. It was how you breathed the culture we wanted into your everyday boss-ness. I wanted to be like that in my everyday boss-ness, too.

Andy: Turns out, I actually still have this presentation saved in my Google Drive. The exact sentences I wrote were: Andy is 5′ 3.” She is the starting goalkeeper for the 2017 United States Women’s National Team. And according to the Google doc, there’s another example just before it: Kyle is a golden retriever. He is six years old and has heartworms. There’s a reason you don’t remember that one, Emma. I can’t imagine a more embarrassing pair of sentences to write to demonstrate anything.

Andy: I’m sure I felt that embarrassed heat surge to my chest when I started writing about Kyle, too. It’s the same heat anyone on the team would feel if I’d asked, “Who wants to volunteer to write some sentences?” It’s not that we need to protect our teams from ever feeling that heat surge. It’s good for them. But there’s an imbalance in the manager-report relationship. Of course, as the manager, any risk I take is inherently less risky. That also means I can really feel emboldened to take those risks.

Emma: When companies talk about “culture,” I think it’s this kind of observational learning that they’re really aiming for. You do something; I see it, it resonates, and I start doing it. Pretty soon it diffuses throughout an organization. It worked like that for me. Whenever I need a volunteer now, I raise my own hand first. So thank you, Andy. And, I suppose, thank you, Kyle the golden retriever. 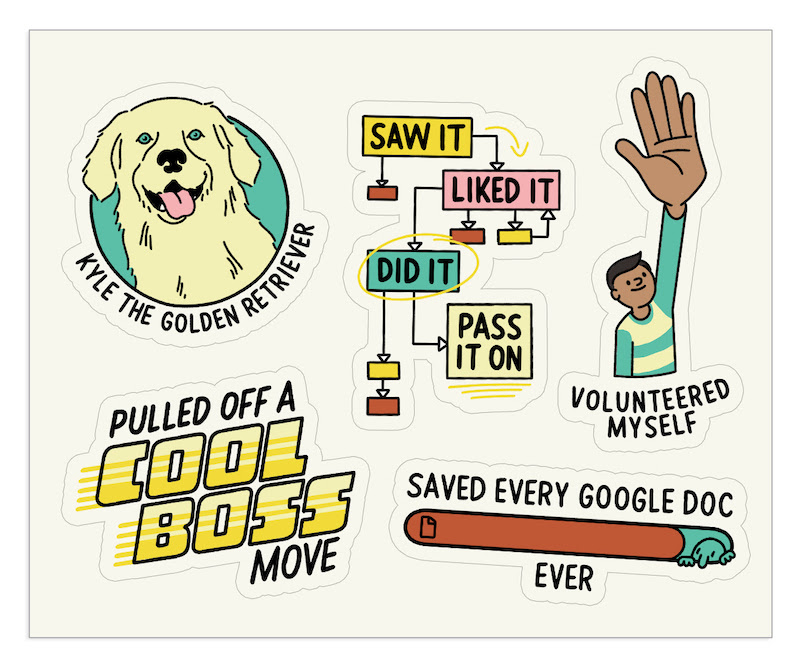 How to make being on-call less awful

Give an important project to an underperformer