Am I supposed to want to manage?

Andy: We get lots of reader questions with the caveat, I’m not a manager, but… and we love it.

Andy: No matter what your job title is, you can write such good documentation that anyone can jump in and ace something on their first try. You can yank the chain when you know something’s not right. You can create a safe space for honest feedback, for figuring hard things out, for talking your buddy through a nightmare situation.

Emma: Yes! Be the person who hears a teammate’s panicked gasp and rolls their chair over. I learn the fastest from people I don’t feel like I need to impress, and I don’t think I’m alone. The more teams I’m on, the more I appreciate having a part in someone’s incremental growth.

Why did you want to be a manager?

Emma: Ignorance played a big, blissful role. I had no clue how hard it was. My first time managing, it was a purely reflexive move — I was on a team, there was room to advance, and that’s what I thought a good employee did: they advance. Plus, I was in a pretty entry-level job writing product copy at the time, and the task redundancy was grueling. Upleveling to a manager was a way to get out of the humdrum.

Andy: Mine came from a similar curiosity I had as a kid about the teacher’s lounge: whatever was going on in there, I wanted a part of it. Plus, they got to hold the whiteboard marker.

Andy: Yeah, in the form of access and control. It also seemed like the only way to move up. I’d never seen a senior-level individual contributor. I didn’t know that could be an aim.

Emma: To be fair, I also thought I would be great at it.

Andy: Oh, definitely. I can see now that’s a totally naive thought — I couldn’t see all 360 degrees of work and pressure my managers had. But, I think naiveté is part of what makes doing something new possible. If I really knew how long I’d feel bad at it, maybe I wouldn’t have gone for it. I’m glad I was blinded by my own faith in myself.

What are the downside of being a boss?

Andy: There’s the obvious hard stuff: delivering bad news, making tough business calls, solving messy interpersonal situations. There are problems that crop up that feel brand new to the human race — you could never in a million years see them coming.

Emma: Someone asks for you to comp their lunch because they were on vacation during a catered meeting.

Andy: Someone keeps wearing their cycling singlet instead of changing into regular clothes.

Emma: This stuff is never in the handbook!

I was also completely sideswiped by how much emotional energy it takes to be a good manager. You want to be there for your people, and that automatically adds hours to your day and bullet points to your mental list. You learn to build boundaries, but it takes time and experience.

Andy: And on the off chance you’re managing at a company that isn’t supporting you, or on a project you aren’t interested in, or on a team with bad actors, or in an industry that’s tanking, or it’s all happening during a time when global issues are seeping into the office, or any combination of the above… There are just so many ways it can be hard.

Emma: But, it’s not like being an individual contributor is easy all the time either.

Is it worth it?

Andy: There are so many great things about managing. My favorite is working with phenomenally smart people, and having a part in whatever they create. Anyone who’s been on a team sport knows this feeling, but you feel it even more as the coach. Especially when you’re the coach of a team that’s doing something they didn’t used to be able to do.

Emma: You get to take credit for a lot as a manager. Fleabag won Best Comedy Series at the Emmy’s this weekend —an ensemble cast on great show that wouldn’t exist without Phoebe Waller-Bridge. Likewise, every individual contributes to team culture, but they take their cues from you. If your culture is one you’re proud of, it’s because of you — doubly so if you’re also the hiring manager.

Andy: Hiring people you’re excited to work with is one of the greatest joys of being a manager. I will definitely double down on that!

Emma: And then those people become your alumni. They move on, and you’ve helped them deserve a bigger salary, more responsibility, higher-stakes projects on more elite teams. It’s really, really fulfilling to have had a part in that journey.

Andy: You also do get to use the whiteboard a lot. A childhood dream come true. 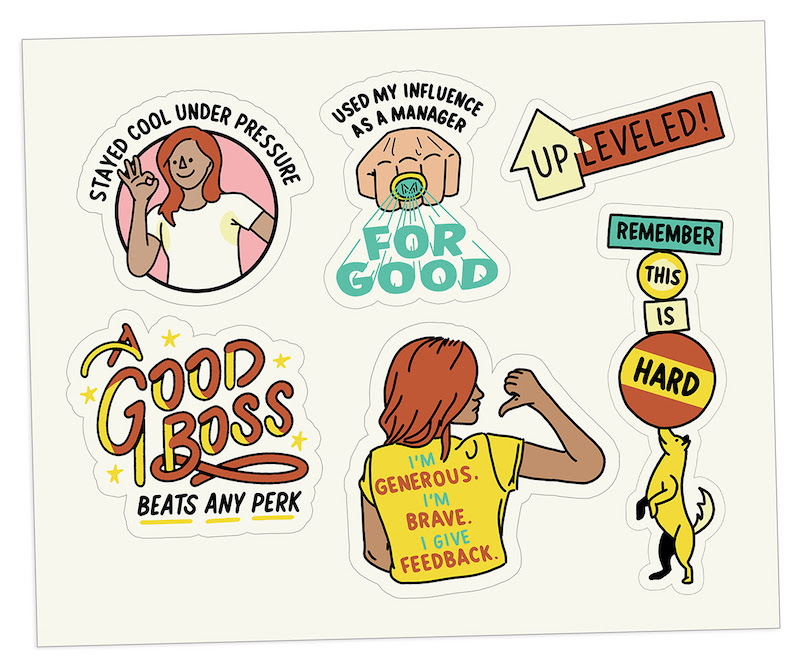 Our illustrator is on vacation! Please enjoy this special-edition roundup of some of our favorites.

I want to move and also keep my job

How do you manage your time?