We asked each other: How do you survive a tough week?

Emma: I’ve had two survival habits since college. The first is endless list making. I make lists for my life a week at a time, and then re-calibrate that list at the beginning of each day and at the end of each day. Often there are sub-lists. I write them by hand, preferably with this type of pen, which is my favorite. Marc Maron says that rituals are magic. This one gives me control when I feel out of control.

The other is giving my brain a break by participating in some sort of weekly activity where I’m good enough that I don’t get frustrated, but that still requires my undivided attention. I’m not very good at emptying my mind, so it’s important that my brain is fully occupied and no other thoughts can get in. For the past decade, I’ve relied on dance classes and yoga, as long as it doesn’t include too much mediation time. (Things I’ve tried that haven’t gone as well: jogging, spin class, baking.) These sort of engaged-but-not-thinking activities reboot my brain the same way a power nap does.

Often, though, little things that felt good last time I needed self-soothing don’t feel as good any more. For several months last year when Andy and I were working together, pretty much the only thing that felt good after the work day was watching episode after episode of SVU and eating Thai food on my couch. Not long after, I hated it and missed my friends and started booking happy hours three weeks out. That’s cool in a big picture way — we are all growing, changing organisms in this crazy stew of life! — but also annoying when you’re like, “WHY DON’T I FEEL BETTER YET?”

I guess that’s just what a rut is: doing something out of habit or obligation instead of questioning, “What do I want right now?” I’ve gotten much better at asking myself that with regularity, and then being generous to myself no matter what the answer is. Another episode of SVU? Sure! Oh, that is making you feel like garbage now? No problem! Let’s go buy a new lip crayon instead.

List 10 small, glorious things that can help you through tough stuff.

Do Later: The Life Wheel

There’s an exercise we’ve both done that helps identify what we’re ignoring. It’s called a life wheel. If you ever feel like work is taking over everything, or you’re working really hard and not feeling satisfied, give the life wheel a spin. It’s an easy way to visualize your life imbalances, and where to direct some energy. There are lots of versions. Here’s a popular one from Chengeer Lee. Emma was first introduced to Hal Elrod’s life wheel assessment through a former boss. Find one that resonates the most, or make your own with life categories that are important to you.

And Remember: Ask Your Team

Have your team do these exercises too! It’s great 1-on-1 fodder, racks up major Good Boss points, and helps prevent burn out, especially if your reports are particularly goal-oriented, or people pleasers, or both. Trick them into making short-term well-being a long-term goal.

Andy: When things are hard, I literally tell myself in the first-person plural, “We’re really asking a lot of ourselves this week.” It feels good to acknowledge why I might feel so tired, so stressed, so whatever it is I’m feeling.

And then I ask myself, “What small thing can make it a little better?”

Yesterday, for example, after a tough meeting, I took myself out to get a cold brew at the coffee shop at the corner. This small thing — it’s $5 — is huge. It’s a walk down the block, it’s seeing sunshine, it’s talking to a human who isn’t about to ask me to solve their problem or update them on the status of something, it’s holding this nice cold glass, sitting on a cool stool, looking out the window, remembering that there is a world outside of the computer world, outside of the people in the tough meeting. I’d planned that coffee as soon as I saw the meeting hit the calendar. It helped pull me through. I repeated to myself, “Soon I’ll be on a stool sipping that coffee.”

Last week, I bought myself this rad sticker pack, with gold star stickers and pizza stickers and giant hearts and cheetahs. I put them in my agenda and feel a small surge of joy.

When I worked at Groupon, I started going on breakfast dates with my boyfriend. After-work dates weren’t working. I’d often end up working through them, or wouldn’t leave on time, always arrived late, smelling like stress-sweat and feeling worse for being there and not in bed sleeping, or back in my inbox cranking out replies. Can you believe we are still dating? Sometimes I wonder how we made it!

I want to do all the tough stuff. These little things — blocking off ten minutes to meditate, eating lunch at a place with real silverware, painting my nails a color that brings me joy as I watch them flit across the keyboard, a cool pen, a plant for my desk — just make it easier. 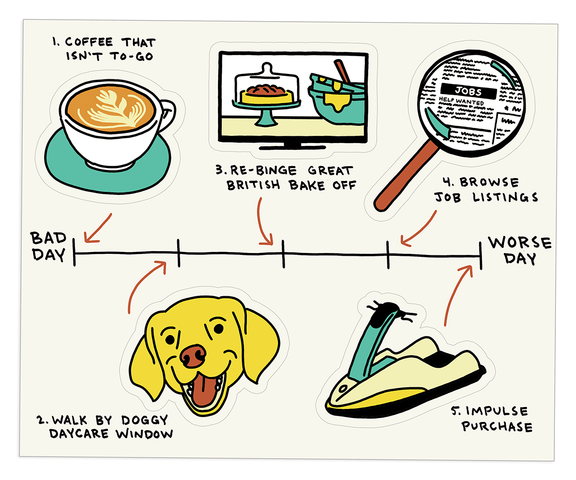