My boss told me to “speak up” in meetings

In a recent 1-on-1, my boss told me I’m killing it—yay! Her only feedback: I should speak up more in meetings to be a “stronger leader” on the team. Problem is, I don’t want to. I know meetings are where decisions get made, but I don’t do my best thinking on the fly. Should I speak up just for the sake of speaking up? “Become” a quicker thinker? Or can I flex my leadership skills some other way?

Emma: Ah, yes. The old “you should talk more” feedback. Been there, given it. Congratulations — you truly are killing it. I can confirm your boss has run out of things to coach you on in your work, so she’s switched gears to your leadership behavior.

Andy: Yes! Even if you never alter your meeting persona, you will still continue to crush. Look at you: responsive to feedback even when it’s “be unlike yourself!”

Emma: Most bosses (myself included) fall back on suggesting a more vocal presence because we are biased toward extroverted leaders. I think there’s a lot of good work being done to confront that particular bias, and acknowledging the extraordinary value of having lots of leadership styles within a team, but it sounds like your boss may not be fully walking that walk just yet. Don’t take it personally — and don’t worry about magically “becoming” anything.

Andy: The people pleaser in me is often super literal about instructions: She said to speak up, so I will make a rule to always say something in every meeting. I might even make a log book with time stamps. But that can end up being a little Amelia Bedelia, so I try to look beneath the literal feedback to what’s at its heart.

Emma: What your boss is trying to say is: “You are great. How can we expose more people more often to the way you think and act and work so it will rub off on them?”

Andy: See? You have a lot more room to flex in a way that feels authentic.

Emma: My recommendation is to look around at the leaders in your life that you want to emulate. (This is different than leaders you think you should want to emulate.) Study these creatures as if they were rare exotic birds. Take notes. Mimic their movements, imitate their sounds. Schedule a coffee-talk to ask how they think about projecting authority and gravitas. You might discover they offer to lead smaller group initiatives, or home in on moments to articulate feedback. Maybe they make a point to circle back to questions raised in meetings with a solutions-oriented email.

Andy: If you don’t have any of these people in your real life, you can use documentaries and movies to find them across time and space. When I watched The September Issue, I enjoyed mapping which aspects of Anna’s management style felt right to me, versus which parts of Grace’s. You get to decide what kind of leader you want to be — and the percentage of time you’re speaking out loud.

Emma: That all said… I think you should start speaking up in meetings.

Emma: It’s not because we want you to contort yourself into someone’s over-baked concept of an outspoken leader! But if one of the things that’s keeping you quiet is pressure to produce the perfect sound bite — free yourself! There’s, thankfully, quite a bit of room between silence and dropping the mic. Aim for being a collaborative contributor. For most meetings, that’s plenty.

Andy: Yes! Holding the bar at “wisdom bombs” is too high. A meeting is not a timed testimony before Congress. It’s not a pitch for funding your life’s work. It’s a meeting, in an office — probably one of many that will happen that day.

It sounds like you might have built meetings up into some sort of sacred place where “decisions are made.” Here’s a good exercise to knock them off that pedestal: After your next meeting, write down who you think the smartest person in the room was. List out everything they said, and what actions are happening as a result. I think you’re going to find that these comments are less groundbreaking than you think.

Emma: And if they are, well, now you have a crib sheet on what to prep for your next meeting.

How to Speak Up (No Wisdom Bombs Required)

We both use the following standbys whenever we want to be thoughtful, collaborative contributors, but aren’t (or can’t or don’t feel like) driving the conversation. Give ’em a spin! As with all things new and uncomfortable, piping up gets easier with practice.

Get curious about thought process: I hadn’t considered approaching it that way before. What made you think of it?

Make space to talk about concerns: Do you foresee any potential roadblocks in making it happen?

Compliment someone: I love how you framed that problem! It’s so much less complicated than I originally thought.

Narrate your gut feeling: My first instinct is to say “that’s going to take way too long!” but I want to hear more. How are you factoring in timeline?

Prepare ahead of time: As I prepped for this meeting, I was struck by…

Amplify good ideas: I agree with Shauna that we should ABC for XYZ reasons.

Take notes on the whiteboard (a powerful move because you control what’s recorded). Ask clarifying questions: Did I get that right? Anything missing from the discussion?

Reference an idea you’ve seen elsewhere in the world: I saw that Competitor A is doing it this way.

Connect the conversation to data, goals, timelines, etc: This matches/doesn’t match our goal/data/timeline.

Combine ideas: Is it possible to do both Idea 1 and Idea 2 at the same time? I could see it coming together like…

Channel the customer/client/stakeholder: In our feedback survey, customers said…

Point out consensus: I think we are all in agreement that…

Drive consensus: Which part of this would need to change to get you on board? 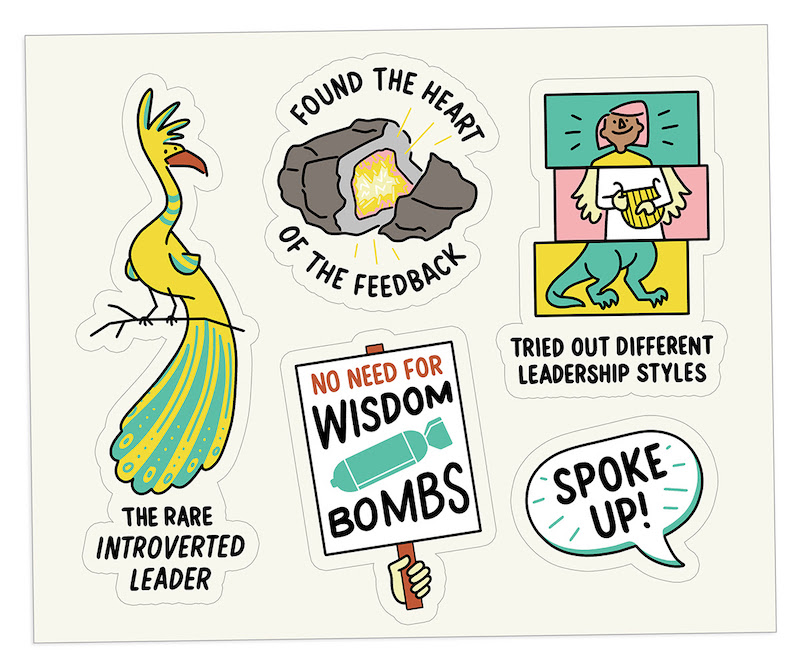 Another Ask Us Anything round-up