How do you clear the air with a coworker you don’t like (and who doesn’t like you) with whom you now have to work closely?

Emma: You know, I’m surprised we haven’t discussed this already on The Bent. There are so many reasons to not like the people you work with. I dislike coworkers all the dang time.

Andy: It’s very normal! Just yesterday, a musician friend was saying that in their orchestra, musicians complain about how their stand partners position the little bitty light they share to shine on their music. We’re all tackling the same interpersonal (and sometimes petty) irritants, even those of us dressed to the nines holding violins.

Emma: I totally get why you want to clear the air. It’s harder to trust someone I don’t like. I’m faster to dismiss their good ideas, and bristle more at their feedback. Being right suddenly becomes very important. These are not ingredients to my personal happiness, and it’s not where I do my best work. I admire your impulse to try to make this relationship better — although I think you have a long road ahead of you.

Andy: Yeah, I’m inclined to agree. I’m curious if your mutual dislike is rooted in a specific incident: something one of you said during a meeting, a bitter battle over a previous project. If that’s the case, an honest, heart-felt apology where you own your part is probably your best bet in clearing the air. I might start the conversation with something like: “Do you have a few minutes to talk? I’d like to apologize for the way I behaved last year during the Kruger bid.”

Outside Reading: How to Apologize

What to say: “The general rules of apologising are straightforward … accept responsibility, acknowledge harm and suffering, promise future excellence, offer an immediate remedy and express sincerity.” Why We’ve Been Saying Sorry All Wrong, BBC

When to say it: “The apology curve is most likely U-shaped: Apologies that come too late, like those that come too early, are likely to fail; the sweet spot is somewhere between the two.” The Art and Science of Apologizing, The Atlantic

After the apology: “The final gallant act of apology is to release your former victim from any expectation of forgiveness.” The Right Way to Apologize, O, The Oprah Magazine

Finally, some inspiration: A few episodes of This American Life which together form a master class in apologizing: Episode 277 and Episode 674.

Emma: Our one caveat is that you can have absolutely zero expectations on the other party’s reaction and response. This has been my downfall in more than one air-clearing conversation: I walked into it with a grade-school understanding that if one person apologizes, the other will forgive them, and bingo bango everything’s fine. That’s not really how apologies work.

Andy: Even in the absolute best case scenario — your coworker listens to and receives your apology, you have a productive conversation, maybe they even apologize back! — it’s going to take time to fill in the space of your mutual dislike with something new. You’ll have to keep showing up with an honest desire to make your working relationship better.

Emma: One strategy I’ve used for this sort of fake-it-’til-it’s-real exercise is to build up a bank of goodwill toward the other person. For every internal eye roll or moment of frustrated criticism, commit to three positive acts: a compliment, a public shoutout, a genuine thank you.

This might not actually be too hard. You’re working closely together now, which means you’ll have time to observe this person in a new light. You’ll be able to learn more about them, ask questions, offer your own perspective. You’ll have more moments of solidarity. I’m imagining some sort of Rocky-style movie montage where we get to watch you master this relationship. You will be nimble. You will be curious. You will remain emotionally removed so even when they do something brain-meltingly annoying, you can smirk at the camera and move right along.

Andy: If that sounds impossible, or if by “clearing the air” you really mean “asking them to change something about themselves,” I would forego any sort of confrontation until you do some important inner work. I hope this isn’t news: You can’t change anyone but yourself. And, in fact, changing myself — or at least reframing my dislike of someone — has been one of the most productive ways I’ve found to improve sour relationships. And it happens without the other person even knowing.

I’m thinking back to a previous job and a Product Manager I couldn’t stand. He was brusque, arrogant, incredibly irritating. But after some time (and a fair bit of journaling) I could understand that he was fighting tooth and nail for his team and that he didn’t suffer weak arguments. I could respect that. We never were friends, but I stopped shuddering when I saw his name on a calendar invite. And he didn’t change one bit.

Emma: I think that is very cool, Andy. I also have a sneaky suspicion that maybe this isn’t the answer our letter writer was hoping for. Deep inner work where you evolve and the other person remains a jerk rarely is.

Andy: Well, in your mind they transform, but I take your point. Which is why we have a get out of jail free card that requires very little effort from either of you. It’s called Being Professional.

Emma: Yes! You don’t actually have to have a good relationship with this person you dislike and who dislikes you. We got your letter right around the same time I heard this interview on Fresh Air. Dr. Michele Harper is a Black doctor with a long career in the ER. She was telling a story from her time as an attending physician when one of her subordinates, a white resident, tried to overrule her decision by calling the hospital legal team. Dave Davies asked if their relationship grew. Her response: “No. There’s [laughter] — it did not grow or deepen. I don’t know what happened to her afterwards. But, you know, I’m a professional, so I just move on and treat her professionally each shift.”

I’m not sure if the coworker you dislike has done something so egregious as what happened to her. But I think a purposefully just-professional relationship is plenty to shoot for.

Andy: A list of what Being Professional means to me has been a helpful tool. To make one, I do a quick brainstorm of how I treat people who I do get along with. What are my emails like? How do I react when they have a great idea? An idea that stinks? What if they’re late? I imagine myself in different scenarios and think about how I behave, what my voice sounds like, what my face is doing. I write those adjectives and actions down, and they become the backbone for my playbook with this person who I don’t like.

Journaling Exercise: How I Act When I Like Someone

Example: Meeting running late in conference room I have booked

How I Act When It’s a Person I Like

Andy: This list is who I want to be no matter who I’m with, so I just do what it says. I like myself more when I do — and it’s actually really simple.

Don’t forget! You can get some real-life Good Boss Achievement Stickers here. 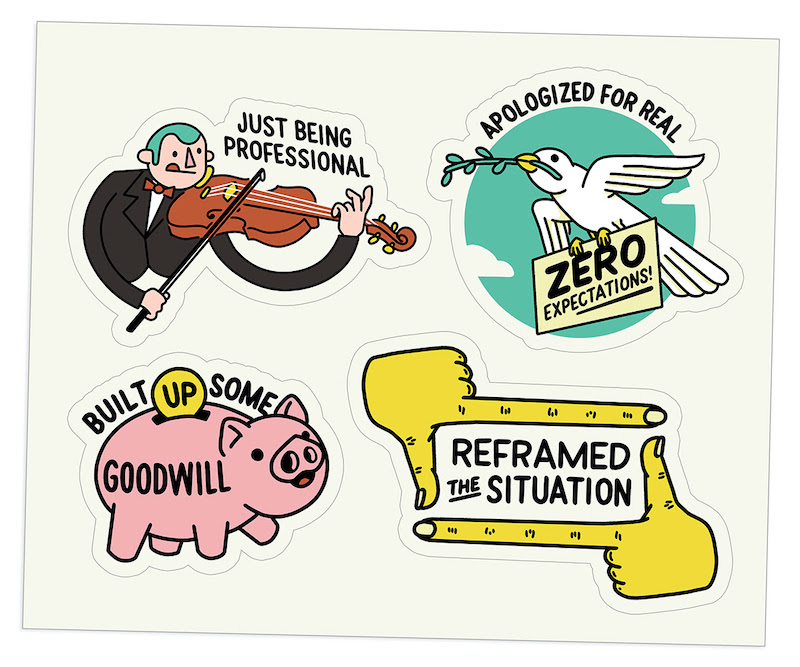 I hate how anxious I feel over feedback