A manager’s guide to chat apps

Emma: I love instant messaging apps. I’ve gotten so used to them as part of my day-to-day at work, I can’t imagine an office without them. What do you want me to do, get on the phone? But as a manager, messaging sometimes feels like one more thing that can go wrong on my watch.

Andy: As with all things internet, the stuff that makes chat great — It’s real-time! Frictionless! Everyone has a login! — also makes it easy to forget that processes exist for a reason. Do you have a place for passing off deliverables, for giving feedback, for asking tough questions about things that are off the rails? In my experience, when there isn’t a healthy outlet for those things, Slack becomes a cesspool of confusion, frustration, pointed fingers, and poorly delivered bad news.

Emma: It’s such a crutch for bad communicators. I’ve been informed of new assignments, of teammates being fired, of mistakes I’ve made in my job, all via chat. I’m not innocent here. Did I forget to tell my team about that critical change in how to expense travel? No worries: I’ll just blast it out in Slack. Hope no one has questions!

Andy: Oh, no one is innocent.

What happens in your team’s chat is a direct reflection of your team’s culture. As a manager or as an individual contributor, I can assert some influence there — just like I can influence the tone of a meeting or how my team collaborates.

Emma: These are some of the biggest lessons we’ve learned about using messaging apps on the job.

Andy: Chat apps are inherently interruptive. That first message is the equivalent of ringing a doorbell. If you ring the doorbell, but aren’t at the door, you’re wasting everyone’s time — and potentially freaking your recipient out.

Emma: I’ve had bosses shoot me an innocuous little, “hey.” And I sit there, watching their still typing… symbol and dreading whatever fire drill I’m about to run. It’s torture that’s so easy to avoid: Just don’t hit Enter until your message is a full thought that can lead to an action.

How to Combine a Greeting with an Action

Better: Hi, I’m printing the agendas for the 4p meeting and I can’t get the printer to connect. Can you come help me troubleshoot?

Better: You there? I’m working on the hiring plan we discussed last week and have a quick question about capacity. If we increase output of deliverables, does headcount increase 1:1?

Better: Do you have 15 mins to talk right now? There’s an urgent and pretty serious HR issue that impacts some people on your team, and we need all hands on deck. Meet in the blue phone room?

You don’t need Rules, but be explicit about expectations

Emma: I really encourage giving periodic reminders that, even though chats feel like any plain old conversation, they are different because they are on the record. Forever.

Andy: I bet reading that sentence right now will change a bunch of people’s chat style, at least for a little while.

Emma: Totally! I changed mine just by writing it. And while sometimes I’m scared of coming across like a Kindergarten teacher telling a room of professionals about the golden rule, a simple one liner during a team meeting every few months is all you need: “And this is your friendly quarterly reminder that if you wouldn’t want it read out loud in front of lots of people, you probably shouldn’t send it via chat. Moving right along.”

Andy: I’ve always preferred adult expectations and example setting, more than capital-R Rules. It’s helpful to remind people about the purpose of each communication tool and how it’s used. Outline these things in the company wiki or as part of the onboarding, and reiterate them when someone forgets or gets it wrong.

Links, answers to specific and time-sensitive questions, “The candidate is ready for you in the interview room!”

Some things shouldn’t be in chat at all…

Emma: Just a few weeks ago at my job, someone dropped a passive aggressive comment in the team-wide chat, another person rebutted, and then they were off, bickering and sniping with an unwitting audience of twelve. As a manager, it’s so tempting to ignore this kind of behavior and fall back on plausible deniability: “Officer, I didn’t see it happen!” I’ve pulled that excuse when I’m too busy, too tired, too annoyed to perform yet another teaching moment. But I don’t recommend it. It’s a lazy boss move, and this is one of those occasions when your team is watching the chat with one eye, and watching how you’re reacting with the other. You need to step up.

These days, my goal is to not make the situation worse for anyone who’s already embarrassing themselves.

Andy: Most people in most situations just need a quiet reminder of professionalism, not to be made an example of. I think it’s generous to tell someone — in a direct message — that they should take it offline: “Hi folks! I recommend a face-to-face conversation to hash this out, or a least a separate thread.”

Emma: One of the most frustrating things about chat is that a whole unspoken world can exist without anyone acknowledging it outside of their screens. If for some reason I’ve gotten involved in the unspoken world, I try to surface it again in person. It doesn’t have to be a big thing, but in their next 1-on-1, I might say, “You came across as really frustrated with Brian the other day on Slack. What’s going on?”

Andy: Ooo, I love that move. Don’t play along with the idea that the screen person is different than the live-action person. Purposefully unite them. 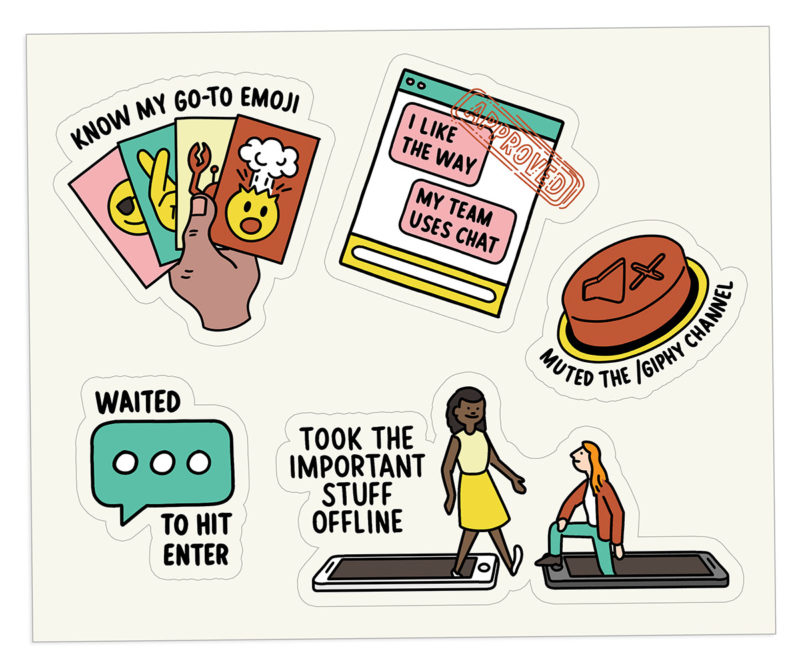